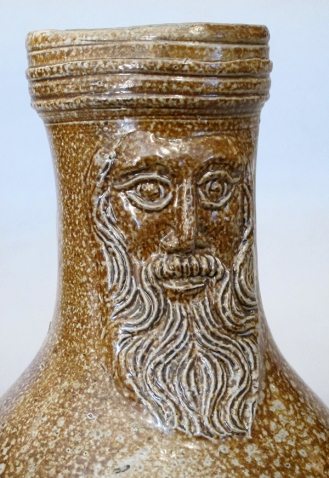 Salt-glazed stoneware jugs with the mask of a bearded man applied to their necks are familiar to most antiques collectors. But there is little agreement about what to call them. They were made in the Rhine Valley potteries in huge quantities for most of the 16th and 17th centuries. So much is undisputed. What is still unsettled though, is what to call them?

“Bartmann” is the German for “bearded man,” so it is at least descriptively accurate and is now the name favored by scholars and curators.

More generally, “Bellarmine” is still a popular name. It refers to Cardinal Bellarmine (1542-1621), a devout Catholic who fiercely opposed the rise of Protestantism in northern Germany and the Netherlands. The bearded mask on a jug for beer or wine may be a caricature of this unpopular churchman, not least because he preached against alcohol! But the association of the jug with the Cardinal is apocryphal at best, and the name should be allowed to wither away.

Another possibility is that the bearded face may have originated in the mythical wild man of the woods, popular in northern European folklore from the 14th century. He was associated with fertility and danger, and he often appears as a decorative motif on stone carvings, metalware and stained-glass windows. Some of the bearded faces on Bartmanns are certainly his, for they are accompanied with oak leaves, acorns and other foliage.

The name “Bartmann” may be descriptively accurate, but it gives no clue to where bearded man came from. I doubt that he originated in the stoneware potteries of the Rhine Valley in the 16th century: he doesn’t seem to be the idea of a single potter that spread to others. His ubiquity suggests that he was a known entity, not just to the potters, but to their customers as well.

I bet he’s the wild man of the woods, not a figment of a potter’s imagination, and certainly not a Catholic Cardinal! He may have been tamed a bit for polite company, but the dark, mysterious forest is his natural home – I’ll drink to that.