Face to Face with the Visigoths

One of the many things I love about traveling is coming across something I’d never expected and I’d never seen before. Like this drinking fountain in a public square in Grazelema, a small hill-top town in Andalucia. I couldn’t pull my eyes away from it. It didn’t look Spanish, it didn’t look medieval or renaissance, as was the rest of Grazelema. Visually it was striking, but it was intriguing as well: it engaged my brain just as energetically as my eye. A small sign beside it told me that is was “possibly Visigoth in origin.” 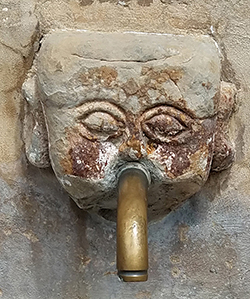 Out came my iPad, a couple of clicks on Google and I learned instantly that the Visigoths were a branch of the Goths from northern Europe who invaded the Roman Empire between the third and the fifth centuries AD and ruled much of Spain until overthrown by the Moors in 711.

So that’s what it was, a Visigoth fountain delivering water to two tourists from Massachusetts just as it had done for 1,500 years. Did I drink from it? You bet I did!

The wall behind the heads had been restored and the pipes through their mouths had been renewed — none too carefully judging by the mortared repairs. But the stone basins into which the water poured were untouched and had eroded until they were almost useless. The faces are stylistically conventional, but the sculptor had made each one unique — the eyes were particularly distinctive, those windows to the soul then as now — so he clearly wanted to represent the nature of the individual within the common social order: they were four different Visigoths, but were obviously all Visigoths — not a New Englander among them! 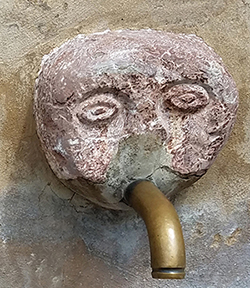 I don’t know what to think about the crudeness of the repairs around the mouths, which were probably damaged by the plumber when he replaced the pipes. But I’m sure that any museum conservator who saw them would collapse on the cobble stones frothing at the mouth! But these fountain heads were not in a museum to be preserved and presented as remarkable survivors of a long dead civilization (which they absolutely are): They were in a public square in a hot dry climate, they’d been there for 1500 years (think about that for a moment) and their job was to provide water to people and animals who desperately needed it. The prime concern of the heavy-handed plumber was to make sure that they could keep doing their job as efficiently today as when they first started.

There’s something to be said for historical continuity taking precedence over historical difference. Lisa and I are from modern Massachusetts, we flew to Spain in a jetliner and drove to the fountain in a car that used a satellite to guide us there, and our iPad told us what we were looking at. We could hardly be more different from the Visigoths who built that fountain, yet there we were, drinking from it, just as they did. It did the same job for us as it did for them.

It would have been very different if the heads had been displayed in a museum. There we would have admired the work of the sculptor, but we could not have shared in the function for which he carved them. I bet the curator would have removed those modern pipes and would have presented the heads with their mouths damaged in the (admirable) pursuit of historical authenticity. But in doing so, he would have denied us the chance of experiencing historical continuity: people drinking from those heads for an unbroken millennium and a half.

I like continuity: it connects people. When Mrs. Visigoth and I use the same fountain, we have something in common.  But if those fountain heads were in a museum behind glass or a velvet rope, I’d look at them and think only how different they are from anything produced today. I prefer it when there’s nothing, be it glass or velvet, between me and the past.

Today, we seem obsessed with emphasizing the differences between people so it’s as refreshing as a stream of cold water on a hot day to experience something that connects us. That’s why I’m an antiques dealer, not a museum curator. I want to keep my socks in the past, not just look at it.