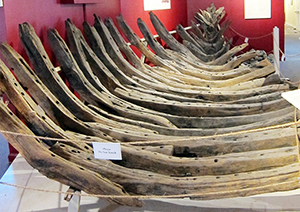 Look carefully at the ribs and keel of the Sparrow Hawk – they’re the only surviving remains of a 17th-century ship in the country. She was carrying 26 passengers from England when she grounded on a Cape Cod shoal in 1626 – even though they’d been heading for Virginia.

The wind and waves that had driven her aground slowly buried her in the sand and then, in 1863, more than 200 years later, the same wind and waves uncovered her skeleton. You can see her bones in the Cape Cod Maritime Museum in Hyannis. 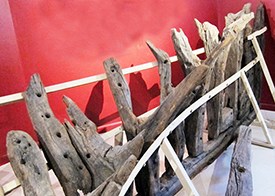 Look at the ribs curving out from the keel; look at the forks that shaped her prow. They come from English oak trees that were probably 200 years old when they were felled around 1600. And they’re almost as nature made them, with only a few surfaces roughly squared off. English, not American.

Most American oaks grew in forests, where they stretched straight up to reach the light at the top of the canopy. English oaks, on the other hand, commonly grew in hedgerows, small copses or on open grassland, and they were as pleased to grow sideways as up. 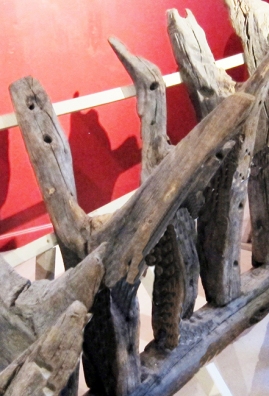 They twisted and branched and forked unpredictably, but a good shipwright could eye a gnarly oak and see in it the shapes of the ribs, keels and timbers that he needed for his ship. The better that nature prefigured the ship, the less work he had to do, and the stronger the ship would be.

The Sparrow Hawk was tiny – just 35 tons with a 29-foot keel, the smallest ship that could possibly cross the Atlantic. By comparison, the Mayflower, which we think of as small, was 180 tons, five times the size, and she even carried a shallop, a small boat that, at 20 feet long, was not much smaller than the Sparrow Hawk.

And then, as a big bonus, we can not only look at the Sparrow Hawk – we can also listen to an account of her voyage. In his journal, Of Plimoth Plantation, William Bradford, the first Governor of the Plimoth Colony, told the story:

“Ther was a ship, with many passengers in her and sundrie goods, bound for Virginia. They had lost them selves at sea, either by ye insufficiencie of ye maister, or his ilnes; for he was sick & lame of ye scurvie, so that he could but lye in ye cabin dore, & give direction; and it should seeme was badly assisted either wth mate or mariners; or else ye fear and unrulines of ye passengers were such, as they made them stear a course betweene ye southwest & ye norwest, that they might fall with some land, what soever it was they cared not. For they had been 6 weeks at sea, and had no water, nor beere, nor any woode left, but had burnt up all their emptie caske; only one of ye company had a hogshead of wine or 2 which was allso allmost spente, so as they feared they should be starved at sea, or consumed with diseases, which made them rune this desperate course.

“But it plased God that they came so neare ye shoulds of Cap Codd […]  and about highwater toucht upon a barr of sand that lyes before it, but had no hurte, ye sea being smoth; so they laid out an anchore. But towrds the eveing the wind sprunge up at sea, and was so rough, as broake their cable, & beat them over the barr into ye harbor, wher they saved their lives & goods, though much were hurte with salt water; for with beating they had sprunt ye but end of a planke or too, & beat out ther occome; but they were soone over, and ran on a drie flate within the harbor, close by a beach; so at low water they gatt out their goods on drie shore.”